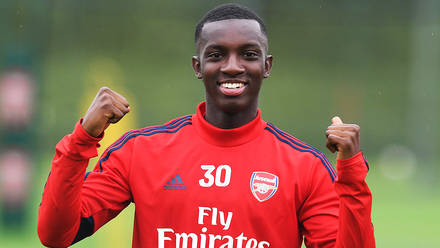 We had two stars in action for their countries on Friday evening. Scroll down to find out how they got on:

Eddie Nketiah scored and Joe Willock also featured as England Under-21s were held to a 2-2 draw by Slovenia in Maribor. Nketiah gave the Young Lions a first-half lead when he slotted home from the spot after being brought down by Zan Zaletal.

Our striker was switched out for Sam Surridge at the break, and his replacement wasted no time in making an impact on his international debut by heading Jon Panzo's home cross at the near post. But after Willock had also left the field, Slovenia hit back through Dejan Petrovic and Janez Pisak to rescue a point.

England now head home to continue their Under-21 Euro qualifying campaign against Austria in Milton Keynes on Tuesday evening. Kick-off will be at 7.45pm (UK time).

Four of our stars could be in action on Saturday, too. Granit Xhaka's Switzerland face Denmark at the same time as Sead Kolasinac's Bosnia & Herzegovina take on Finland (5pm), before Dani Ceballos' Spain meet Norway (7.45pm) and Lucas Torreira's Uruguay host Peru (midnight).

Copyright 2019 The Arsenal Football Club plc. Permission to use quotations from this article is granted subject to appropriate credit being given to www.arsenal.com as the source.